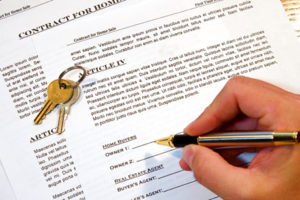 Each person owns as much of a party wall as is situated on his or her land. The wall is subject to cross-easements?reciprocal rights of use over the property of another?in favor of each owner for the support of his or her building or for the maintenance of the wall. A party wall can also be owned by adjoining tenants pursuant to a Tenancy in Common, or the wall can belong entirely to one of the adjoining owners, subject to an Easement or a right in the other owner to have it maintained as a dividing wall between the two tenements.

Creation
A party wall is ordinarily created by a contract between the adjoining owners, by statute, or by prescription. Adjoining Landowners can enter into a contract to build a party wall. The parties can agree that the wall is to be located on land owned entirely by one of them or that it is to stand partly, usually equally, on both parcels. Under a typical arrangement, one party builds the wall and the other contributes to its construction. The parties can also agree that an existing dividing wall is to become a party wall.

Statutes authorizing the construction of a party wall by one of two adjoining owners when the line between the properties is vacant embody the Common Law and have been upheld as a constitutionally valid exercise of the Police Power of a state. These statutes are subject to a Strict Construction since they permit the taking and permanent occupation of a portion of land.

When a wall between adjoining buildings has been continuously and uninterruptedly used as a party wall by the respective owners for a period of time set forth by statute, a prescriptive right to use the wall arises.

A party wall can also be created when the owner of buildings that stand on adjoining lots and share a common wall, which forms a part of each building, conveys the lots to different persons. Each owner acquires title to one-half the wall and an easement for its support as a party wall in the other half. This rule applies even though the deeds are silent concerning the rights of the parties in the wall. The result is the same when one of the lots is retained by the original common owner.

Duration
A party wall that is constructed without any reference to a time limitation implies permanency. A wall built as a result of an agreement loses its character as a party wall when the parties rescind, or cancel, the agreement. Although the title to one-half of such a party wall, which is jointly owned by adjoining landowners, cannot be waived or abandoned, a party wall easement can be extinguished when the party entitled to it renounces his interest.

The easement of support of adjoining buildings by the party wall ends when the wall becomes unfit for its purpose or is so decayed as to need rebuilding from its foundation. When the buildings are accidentally destroyed, the easement ends, even though a portion of the wall, or the whole wall, remains standing.

Manner of Use
A party wall is for the mutual benefit and convenience of both owners. Each adjoining owner has the right to its full use as a party wall in the improvement and enjoyment of his property. Neither owner can use the wall in a manner that impairs the other’s easement or interferes with his or her property rights.

By common usage, a party wall has come to mean a solid wall. Unless an agreement exists between the adjoining property owners to the contrary, neither has a right to maintain windows or other openings in the wall unless they are necessary for air and light.

A party wall can be used by the adjoining owners for the construction and maintenance of chimney flues and fireplaces. Both parties are entitled to use a flue built into the middle of the wall, although the lower part of it is located wholly in the other owner’s half of the wall.

Destruction and Rebuilding
Ordinarily neither of the adjoining owners has the right to destroy or remove a party wall, but if a fire or other casualty causes the wall to become useless to either owner, it can be removed.

In a number of states, even though a party wall is sufficient to support existing structures, an adjoining owner can replace it with a stronger wall to support a new structure requiring greater reinforcement. The owner must replace the wall within a reasonable time without damaging the property of the adjoining owner.

Either party can replace a party wall that is dangerous to life or property or insufficient for the support of existing buildings. Neither owner has any right to have a dangerous wall bolstered by allowing it to rest upon, or be sustained by, the timbers, walls, or parts of the other’s building.

No obligation is imposed upon either owner to erect a new party wall to replace a wall that has been destroyed by some accidental cause, even if the foundation of the wall remains firm and sound. When the adjoining buildings are destroyed and the party wall remains standing, neither adjoining owner is obliged to reconstruct her building as it existed.

Addition, Alteration, and Repair
Unless restricted by a conveyance, transfer, or a party wall agreement, either owner can add to, alter, or repair the wall. In doing so, the owner must not damage the adjoining property or impair the easement to which the owner is entitled.

Either party, for example, may increase the height of the wall, provided the increase does not diminish its strength. Similarly either party may underpin the wall and sink the foundation deeper or increase the thickness of the wall by adding to it on his own land.

Contribution
In some jurisdictions, an adjoining landowner who uses a wall built partly on his or her land by the other adjoining landowner has no duty to contribute to the cost of construction of the wall. If there is no evidence of the conditions under which the wall was built, courts presume that each person owns as much of the wall as is situated on his property and has no obligation to contribute to the other’s wall.

In some jurisdictions, liability might be imposed by statute. For example, a statute might authorize one of two adjoining landowners to build a wall partly on the adjoining land and require the other landowner to contribute, if and when she used the wall in the construction and support of an adjoining building; until payment would be made, the wall would be owned exclusively by the builder.

The obligation to contribute can, of course, be a provision in the contract between adjoining landowners, but the agreement need not be express. It can be implied from the conduct of the parties, although a contract cannot be implied from the mere assent by one owner to the construction of a wall standing equally on the land of both.
HTTPS://KCREALESTATELAWYER.COM 816-545-9708